The woman’s a total gun nut loon who’s also about to get thrown out of Congress, if not arrested. Do the Cusumanos have a major screw loose somewhere? Are they too QAnon?

We were just tipped off about this by a reader. From a Denver newspaper last November…

Republican Lauren Boebert is running to represent Colorado District 3 in the U.S. House of Representatives. District 3 includes Pueblo and the rural western slope. One week out from the election, her top contributor is Cusumano Real Estate Group, which is based in Burbank, California.

As pillars of the Burbank community, the Cusumanos have some major explaining to do. The Giants have demanded their money back — they also gave $5,600 on the list. 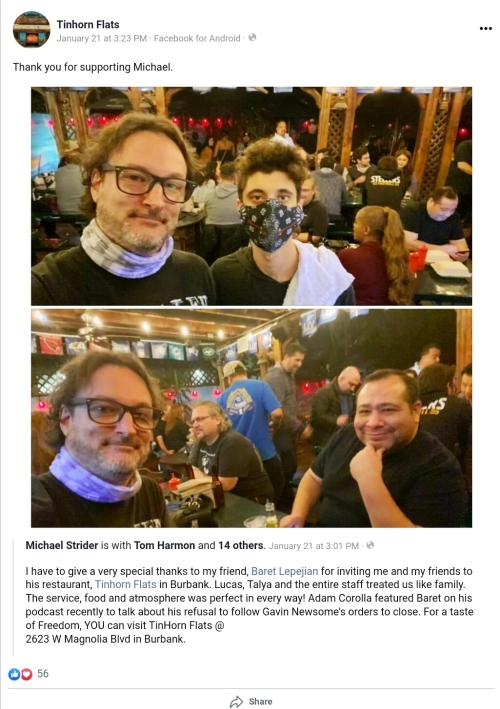 Imagine putting something like this out there about yourself.

This stuff will kill you 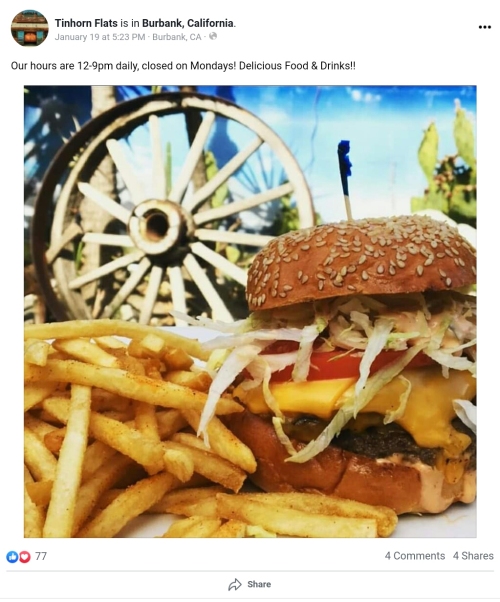 The L.A. County Department of Public Health tells me that the health permit revocation of Tinhorn Flats in #Burbank was upheld, and that the owner will be notified of the decision by next Wednesday.@BurbankLeader

Btw, anyone get a good explanation from the City of Burbank as to why their own hearing isn’t scheduled for another month?

It’s obvious that Burbank’s been slow walking this. As we’ve pointed out many times here, they could have cited a CUP violation in early December.

Nothing in the Municipal Code requires a month-long+ waiting period for a hearing, which is what they told the Outlook last week.

They’re kind of missing the point

Ah, a left-wing socialist standing guard with a mask at a closed and empty storefront once full of proud and destructive MAGA nuts is connoting the exact opposite message.

You either get things or you don’t, and apparently you have to be born with it. Intelligence, perception, sensitivity, taste — all is fleeting.

They need to be zoned way far away, like near the airport

These critics are right. Marijuana shops are tacky and they attract rabble. For every cool secretary or teacher going in there for something to relax with there’s 10 or 12 white trash assholes driving into town with nothing else to do.

Letter to the Editor: Resident, Disney Employee Says No to Marijuana Storefronts — "They are fortresses, with no windows and armed guards." #LettertotheEditorhttps://t.co/6jyJOIAYzL pic.twitter.com/08dYF7U6iq

The opponents of course are being ridiculed as if they were old lady bigots ph0ning in to the police department about Black people driving down their street. Ha ha ha.

As to the tax revenue potential of having lots of pot shops in Burbank, why not then bring in casinos? You might as well — the customers will already be there.

Burbank! Racing to the bottom.

And Victory, and Sixth Street?

If so then this “downtown” Plan can’t be taken seriously.

Why doesn’t Burbank get a decent bus system instead? Like, say, one whose reason for existence isn’t to cater to the commuting needs of affluent out-of-town media employees.

Where do these Burbank buses go for the residents?

Unless you want to walk a mile from your house to the nearest bus stop, nowhere. Burbank has by far — by FAR — the worst municipal bus system in Southern California.

Look how good and functional the Glendale Beeline is, or Santa Monica’s Big Blue Bus. Or Alhambra’s. Then look at Burbank’s.

The Philosopher Burger Cooker speaks out

And be proud, BPD. This is what you’ve been giving aid and comfort to. Granted, it does represent the cracked thinking of about 70 to 80 percent of the Burbank native class still left in town 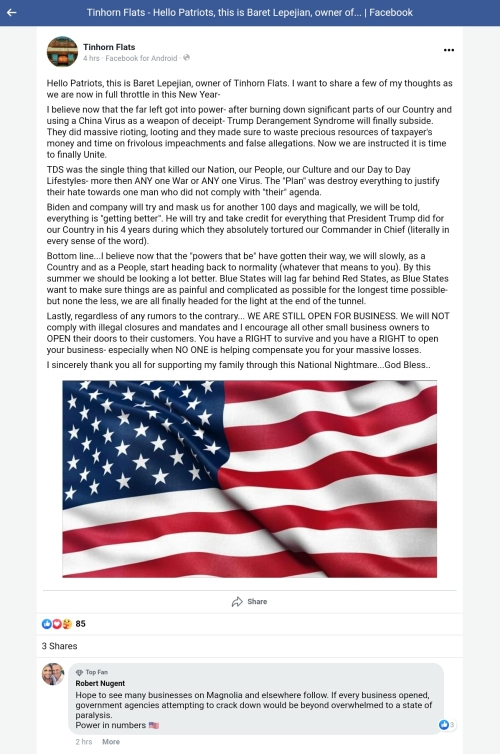 Still trust the food there?

Operation of the BPD is completely under the purview of the city manager. He’s completely autonomous.

And, it’s a violation of both the Municipal Code and the CM’s individual employment contract for the Burbank City Council to subvert his authority, or direct him what to do in the specific operations of the city, especially anything that involves employee matters. The city council has an advisory role only…

At 6:00 PM today, the #Burbank Police Commission will be meeting to review and discuss the draft report of recommendations to City Council regarding @BurbankPD.

Please use the following link to access the meeting agenda and participant instructions: https://t.co/YGRDB5gltO

The most they can do is fire him and pay off the rest of his contract … and then hire someone else under the same terms.

It all gets worse, too. During the last 15 years the Burbank City Charter has been voter-revised to lock in these limitations, and others.

The police commission for instance has —  unbelievably — no governing authority over the PD. Not in Burbank.

Sorry guys, but if you’re over 35 and you’re smoking pot all the time and need a local dispensary, you’ve got a problem

In other words, no one needs a nearby “dispensary” unless they’re buying it alot. (Love that euphemism, dispensary.) 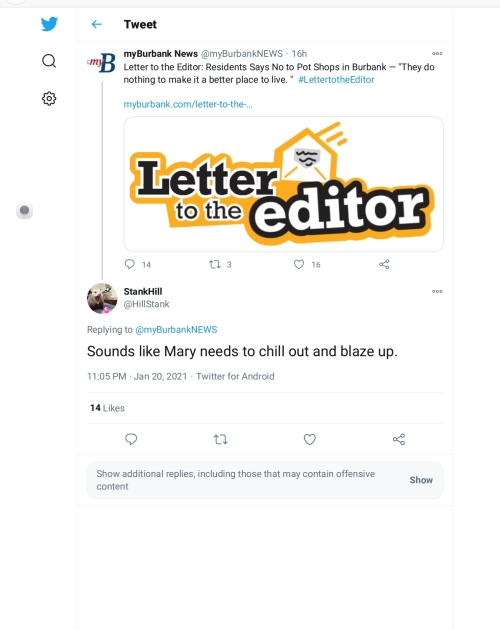 And it’s a truism. Weed attracts lots of assholes and idiots. Burbank’s got enough of those floating in. Who wants more?

It’s gonna be like gun stores. When one or two come in and scope out the affluent atmosphere, lots more follow. Another Oasis is born.

Weed and guns, no

Imagine having this as your neighbor. Just the design scheme alone is a disqualifier.

Ah, no. Burbank’s gotten sleazy enough the last couple of decades to want to become an oasis for cannabis. It’s already become a popular destination town for the trash element anyway and an oasis it will indeed turn into.

In a similar vein, though a lot more crackpotty, look what’s been going through the Burbank mails lately:

Hilariously overwrought. The only thing missing is the Diane Linkletter reference.

But there’s a decent question here. Is pot, weed, and/or cannabis trashy? Does it attract undesirables? Is there a good reason for not wanting too much of it around?

The answer is “Yes.” Of course.

There’s also nothing more pathetic than over-35’s needing their toke. If by that age or after you need to smoke weed for stress or orgasms or general bonhomie it’s time for a change. Start collecting wine and decent people.

Yeah, we’ve heard the “It goes right to my c**t” line lots of times. But it’s never been the only thing that does. Find a bigger dick.

Burbank needs to keep these gun stores and cannabis stores as far away as possible. They’re dumb and ugly and always ultimately attract the worst.

A nation that isn't broken, but simply unfinished.”

“For there is always light,

If only we're brave enough to see it,

If only we're brave enough to be it.”

People’s sophistication and taste levels have really been shot. This stuff is just so subpar, so off-the-top-of-the-head junior high.

There’s nothing not stale or inept about any of it: the ideas, the execution, the obvious and terrifically jangled imagery, the dumb mismatched metaphors.

Like what’s the use of trying to be good or great when everyone around you is a proud and arrogant numbskull? Imagine being young now and possessing a critical sensibility if you were somehow raised that way by accident. Accessing the past for ideas and inspiration only goes so far.

Ah, it’s not hard to figure out at all…

Really hard to figure out is how County Health has shut down outdoor dining, told everyone not to travel or have family gatherings but they let the City of Burbank hold sports camps for kids. Schools are not allowing players to use fields or practice but City fields are OK to use

Regardless of what someone else allows, the City of Burbank ultimately chose to ignore all common sense and “let” these events go on.

In other words … it’s BURBANK’S fault!

Americans really are satisfied by so little

This country’s a cultural and intellectual disaster. Who and what’s to blame?

I read my second grade children the story of Yo-Yo yesterday. It was a surprise to see him and hear his beautiful music.

Ah, Amazing Grace is not what he’s about.

Or Bon Jovi at dawn singing “Here Comes the Sun”. What a great day.

It’s a British song, not American.

And can you get anything more unimaginative than Amazing Grace? Talk about hackneyed. Why couldn’t he have done a fun little Charles Ives bit? Or Gershwin?

So Biden’s speech was rambling and cliche-ridden and had absolutely no cadence to it. The choice of  music acts was show-biz awful, and the arrangements were clownish. And the “poetry” this time made Maya Angelou 30 years ago look like –yes– that “James Joyce” reference from last week.

It was strident and dumb and oh so self-serious and sententious. Structurally it was a mess, and content-wise it came across as nothing but a string of hackneyed phrases and stale, cliched images and mismatched metaphors. “Oh, and she went to Harvard!” the TV commentators told us, as if that fact was a validating plus, a little bonus for the audience. To us it was an explanation.

Most people are satisfied by so little. First disappeared taste and critical discretion. Art quickly followed.

as you watch all these different musical styles tonight remember that yesterday the (now former!)secretary of state attacked multiculturalism and said it wasn’t American

It was all corporatized pop!

Classical? Jazz? Roots? Where were they?

To be against “multiculturalism” doesn’t mean that you’re against other cultures. It means you don’t think everything’s on the same level, or that Beethoven should be shunned.

So we were tipped off last week that one of the spinoff groups at the Talamantes’ **We Love Burbank!** Facebook page has become a repository for some of the most paranoid and crankiest MAGA crap seen around town since Stacy Charlton got tossed off the platform entirely.

Among the enthusiastic participants are Pat Fogg and Mike Hastings. They’re letting their Trump flag fly high over there and it’s become embarrassingly nutty. Not just them, but the whole crowd is unhinging in public. Lots of old movers and shakers.

Or so we’ve been told. Except for the death sites, we completely avoid those local FB groups as a matter of choice. The constant clash between teary 60’s nostalgia and reactionary hatred towards “those socialists” is just too weird. It’s not our Burbank.

Apparently this guy is one of the ringleaders.

They look way too happy for socialism having just been upon them, no?

Toxic Burbank is bigger than we thought.